The application allows you to take voice notes and save them locally or send them to cloud services. It can use custom punctuation and word replacement list, capitalization control, undo command and other useful tools for editing notes.

Go to the page of the voice notebook on Google play and install it.

The voice notebook uses Google's speech recognition, so Google app must be installed, updated and enabled in your computer.

To improve the speech recognition it is desirable to have an Internet connection and also need to install a language pack for local voice recognition. Without a local language pack, if the Internet is lost, the application will stop and give an error. 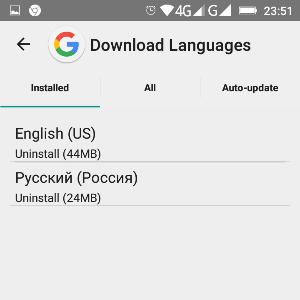 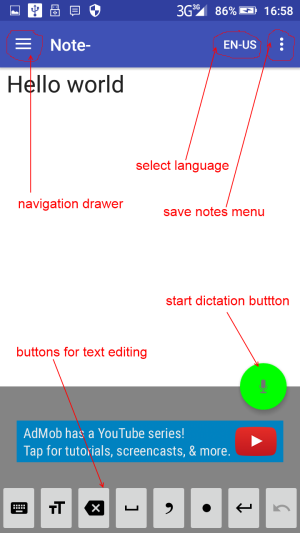 The main elements of the application

Basic settings are opened through the "General settings" section of the navigation drawer. 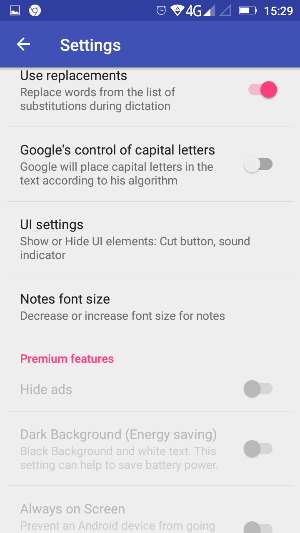 Setting "Google's control of capital letters" enables or disables the Google's capitalization algorithm in words (Google still does it with errors). If it disabled then the management of capital letters is carried out only with the voice notebook.

The list of substitutions is opened through the "Replacements" menu of the navigation drawer. 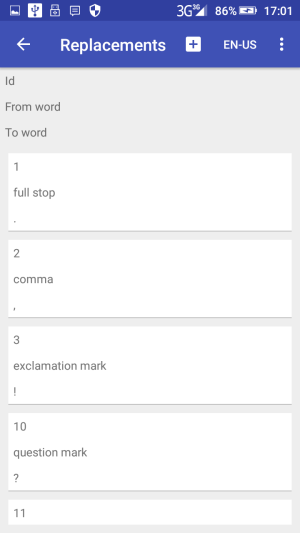 A list of substitution is defined for each language of voice input. Although Google does self-punctuation automatically for many languages, adding punctuation marks to this list adds reliability to these replacements. P.s. An invisible carriage return character in replacements is entered by pressing the "Return" key (the "Enter" key).

There are some prepared replacements for punctuation fo the language codes: en-US, en-GB, fr-FR, de-DE, it-IT, ru-RU, es-ES, so you can study them, and make you own by the same principles.

In addition to punctuation, any substitutions can be added to the substitution list. Do not make this list too long, so it may reduce performance.

In replacements, you can even use regular expressions for the Java language. For example, replacing the word (^|\b)i($|\b) with the word I, will replace the lowercase separate standing letters i to capital letters I (the replacement is preinstalled for in English).

In the substitutions list, you can set the command to remove the last spoken sentence (it works like the "Undo" button). To set it, you need to enter #1# in the "To word" field. You can use any word to activate this command (word in the "From field").

To edit the substitutions, a short press on the list item is used, to delete - a long one.

In the dictation mode you need to clearly pronounce the words. In this mode, the "Undo" button is active, which undo the last spoken phrase. In addition, a sound level meter can be displayed. 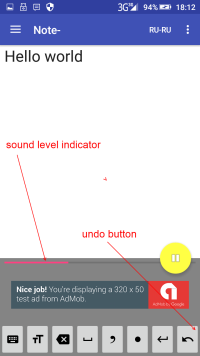 In editing mode, the keyboard can be opened. 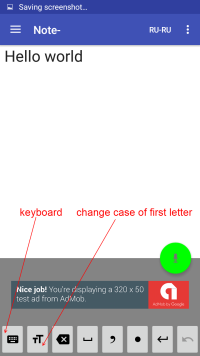 То change the case of the first letter of a word, it is convenient to use the "Change letter case" button. To do this, place the cursor on the desired word (or immediately after it) and press the button.

If there is no network, then you can work in offline mode by setting the pre-required language in the voice input settings in offline speech recognition section.   It is better to disable the transfer of data at all in this case.

The application has a widget that automatically turn on recognition when openning the notebook, and can also immediately open a new file for writing (+ option).

If there are any errors in the application, check that the Google app is installed, updated, and voice input uses it by default.

During the dictation, the message Server sends error: ... (ERROR_SERVER) pops up - the Internet has disappeared, and you have not installed the local voice input package for your language. Install it and error will disappear.

During the dictation, the message Audio recording error (ERROR_AUDIO) appears - if the Android version is greater than 6, verify that the permissions for the Google app (Settings -> Apps -> Google -> Permissions) have true microphone access.

Offensive words are replaced with asterisks - there is a Google setting Block offensive words (Settings -> Language and Input -> Google voice typing). Turn it off if you want.

Can not open .txt file from the file manager on Android 6 - give the App the permission to access files on your device (make export first).

When working simultaneously on several devices, the upgrade to the premium on one device does not immediately synchronize to others - wait until the cache of the google play market application is updated (usually for 24 hours)